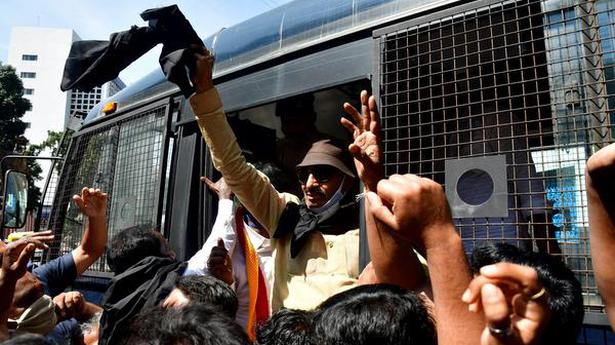 A day after BJP legislator Basanagouda Patil Yatnal appealed to the chief minister not to reverse the decision to form the Maratha Development Corporation, the political secretary to the chief minister, MP Renukacharya, defended the minister’s decision on Sunday. leader BS Yediyurappa to create the company and attacked former lawmaker and Kannada leader Vatal Nagaraj for his opposition.

Warning Mr Vatal not to use harsh language against the chief minister on this issue, he said they would also be forced to use the same language to respond. He also defended the statements made by Mr. Yatnal about pro-Kannada leaders.

“The position taken by the leadership of Kannada Chaluvali on the issue of Maratha society is not fair and there is no need to call for a bandh, especially during the COVID-19 situation. Instead of calling for a bandh, they should respect the chief minister’s invitation to discuss, ”he added. He also pointed out that the government’s announcement was for the Maratha community and not for the Marathi language.

“Sir. Yediyurappa’s position on Kannada is unquestionable. He was responsible for obtaining classical Kannada language status and he had organized Kannada sammelan in Belagavi during his first visit. Kannada militants will be held accountable for everything. unfortunate incident during the bandh, ”he added.

However, Kannada activists, led by Mr. Nagaraj, continued their protest in Bengaluru on Sunday waving a black flag. Mr. Nagaraj also reiterated their intention to move forward with the Karnataka Bandh on December 5th.

“Being Treated Like Terrorists”: Sena’s Sanjay Raut On Farmers’ Protest

“Being Treated Like Terrorists”: Sena’s Sanjay Raut On Farmers’ Protest

Olympic-Bound Athletes Will Be Given Priority When COVID-19 Vaccine Is Available:...