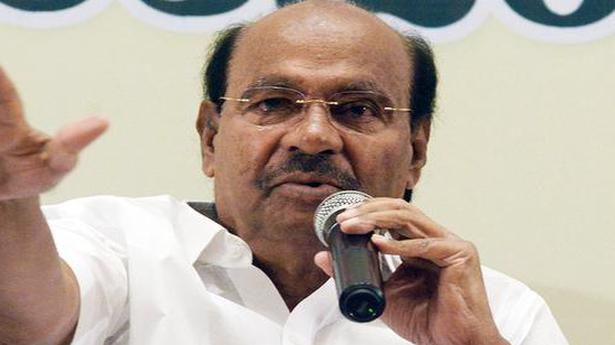 Pattali Makkal Katchi founder S. Ramadoss on Sunday announced a first round of protest from December 1 demanding a separate 20% reservation for the Vanniyar community in education and employment in Tamil Nadu. The second round of protests will start from January.

It was one of three resolutions adopted at the general assembly held jointly with Vanniyar Sangam. The resolution further stated that protest committees had been formed and urged cadres to place banners explaining the reasons for the protests in the villages.

“Kalaignar gave us rotten mangoes. You give beautiful Salem mangoes. It is in your hands to put an end to this demonstration ”, he declared. Dr Ramadoss has warned the state government that the protests will be as intense as the Patel unrest in Gujarat and the Gujjar unrest in Rajasthan for reservations if applications are not accepted. “The protests are expected to be so intense that the government is expected to say it accepts our demands in four days. We are ready to face all the consequences. Vanniyars from other parties should also participate in these demonstrations because your children will benefit from them too, ”he said. Providing historical context, Dr Ramadoss accused the past and present rulers of Tamil Nadu of actively working to deny their fair share in education and employment. “Under Kamarajar’s administration, 38 castes were clubbed and the most backward class category was created. However, no reservations have been made for this category. In 1972, Kalaignar discontinued the MBC as a category. Later, during the administration of MGR, he created the Ambashankar Commission, which recommended that the 34 communities in the backward classes be removed as they valued reservations. However, MGR added 29 upper castes into the backward class category, ”he said.

“Kalaignar added 15 upper castes and MGR added 29 upper castes to the backward castes category. Vanniyars cannot compete with them. That is why we are asking for a separate 20% reservation for them, ”he said.

When he met Mr. Palaniswami personally and raised the party’s demands, the chief minister was not receptive, alleged Dr Ramadoss. “Although we are in alliance with AIADMK, there is no point. The reason is that they want Vanniyars to be the community that works for others, ”he said.

Referring to the examples of Andhra Pradesh and Kerala where proportional representation is implemented, he said: “In Kerala there was a time when Nairs and Namboodhiris only looked at Ezhavas when they were 32 feet apart. But, today, they hold jobs within the state and central government. The reason is that separate reservations have been provided for Ezhavas. ”

PMK youth wing chief Anbumani Ramadoss said the request for separate reserves should not be seen as simply a matter of caste.

“It’s not a question of caste but a question of development. This problem must be solved if Tamil Nadu is to develop. If we divide Tamil Nadu into four parts – north, south, west and Chennai, we can see that the north of Tamil Nadu lags behind in education compared to the others. So we see it as a development issue. If Vanniars grows, Tamil Nadu will grow too, ”Mr. Anbumani said. “All political parties and communities will accept this request. There is no obstacle to accepting our requests, ”he said.

Premier League: Top clubs will struggle with injuries without changes to...