“Feels like homecoming”: Jaishankar to Indian diaspora in Mauritius 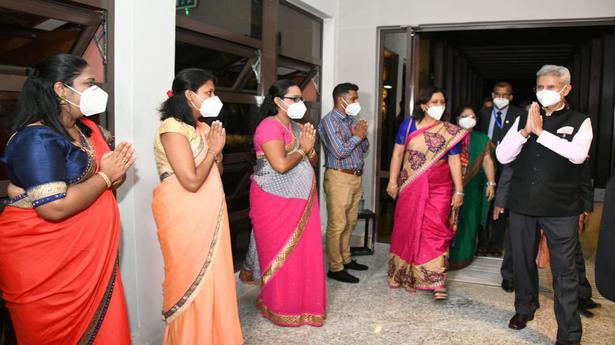 Jaishankar, who arrived in India’s key strategic maritime neighbor in the Indian Ocean region on Sunday evening from the Maldives on the final leg of his two-country tour, met with community members Indian at an event and thanked them for the living faith and fervor in Mauritius.

In a tweet, he said: “It’s like coming home. Thank you to the vibrant Indian community for keeping our faith and fervor alive in Mauritius. A shining example of all that India represents – peace, pluralism, shared progress and universal brotherhood – values ​​more relevant than ever today. “

“I have traveled to many countries during my long career as a diplomat and my most recent incarnation as Minister of External Affairs, but I must tell you that visiting Mauritius is always different, it actually feels like going back to the sources.

“Every time I am here in your beautiful country, I realize how connected we are. To be among people like you who continue to cherish and celebrate their Indian roots and traditions in such a vibrant way, it is actually a feeling that is very difficult to put into words, ”he said.

Whether it is Maha Shivratri, or Kavadee Thaipoosam, or even Ganesh Chaturthi or Holi, the Indian community here keeps its faith and fervor alive, the minister said.

“Likewise, I can taste the flavors of India every time I visit, whether it’s the chilli cake or the Dal-puri. And I hear it in the Hindi newspaper on Mauritian radio and television and even in the geet-gawai melody; and I see it in the colorful sarees, the clothes, the dancing, the music, some of which we have had the pleasure of witnessing, ”Mr. Jaishankar said.

Mauritius is probably the only country in the world where there are a thousand Indian socio-cultural organizations, he said.

“You are a vital umbilical cord which nourishes and keeps alive our common cultural and historical heritage and passes it on to future generations,” said Mr. Jaishankar.

India has demonstrated this in action during these difficult times of COVID-19 by providing vaccines to more than 74 countries and by pledging to immunize all UN peacekeepers around the world, he said. .

“As for Maurice, who is one of our closest friends and partners, it is only natural that we offer vaccines from the start of our own vaccination program at home.

“At the request of the Mauritian government, we have also facilitated the arrival of 100,000 additional vaccines. I want to give you a clear message, India has always been alongside Mauritius through the thicknesses; before, now and forever, ”said Jaishankar.

He said India would, as always, support Mauritius’ capacity building in vital areas of maritime surveillance and security to meet the challenges of an uncertain world. This unique confidence with a record half-century should inspire even greater confidence in future endeavors.

“What touches me very deeply every time I visit Mauritius is the pride that the Indian diaspora and Mauritians like you feel in the growth and development of India”, he said. he declares.

More than 200 people of Indian descent hold leadership positions in at least 15 countries around the world, according to a latest report, he said.

“Although I must say that Maurice sets the example. Your valuable contribution to building our nation; your role as a “living bridge” between India and your countries of domicile and the commendable reputations you have acquired through hard work, skill and assimilation; have all helped to fly the Indian flag higher in different parts of the world.

“Thank you today on behalf of all Indians for your outstanding contribution to Mother India. I invite you and all the socio-cultural organizations and businesses present here, and those to whom you would like to communicate this message, to send us your ideas, proposals, suggestions, comments that you may have, to help us move forward further. . this shared path ”, declared the Minister.

Like India, Mauritius is a shining example of how a multiethnic, multilingual and multireligious country can not only become a vibrant and prosperous democracy, but also have a thriving and performing economy, he said.

People of Indian origin constitute nearly 70% of the population of Mauritius. Their ancestors were sent there as indentured laborers during British rule.

India on Monday signed a landmark Comprehensive Economic Cooperation and Partnership (CECPA) agreement with Mauritius, the first of its kind with an African country, making the strategically located country a launching pad for business expansion in the huge African continent.

In contrast, the United States is well ahead of its target Union Health Minister Harsh Vardhan said in October 2020 that India is expected...
Read more
World

In contrast, the United States is well ahead of its target Union Health Minister Harsh Vardhan said in October 2020 that India is expected...
Read more