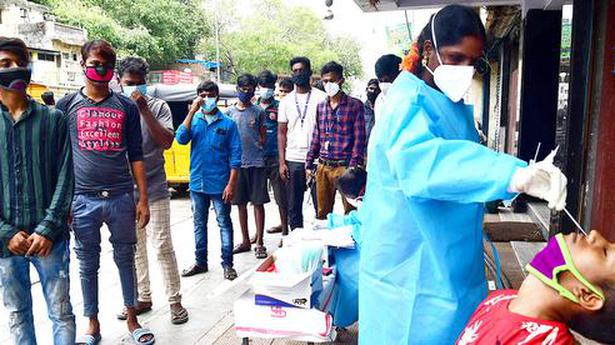 In the past 24 hours, only three districts in Tamil Nadu have registered more than 100 cases of COVID-19 and nine districts have registered less than 10 cases each. Chennai continued to have the highest number of people who tested positive.

No less than 19 people lost their lives. Of these, 11 died in private hospitals and eight in government facilities. So far, 11,605 people have died from the infection.

The daily bulletin of the Directorate of Public Health recorded 108 new cases in Chengalpattu and 154 cases and two deaths in the district of Coimbatore.

In nine districts, the number of people who tested positive was a single digit. Of those who lost their life in the past 24 hours, one person who had no chronic illness died from the infection. A 54-year-old man from Chennai, admitted to a private hospital on November 3 with complaints of fever, cough and nausea for three days, tested positive on November 12, November 17 and again on November 21. On Saturday, and the hospital recorded multiple organ dysfunction and COVID-19 pneumonia as the cause of death.

A 43-year-old diabetic man from Chennai was admitted to the Rajiv Gandhi government general hospital on Saturday evening but died hours later. He tested positive on November 15. The hospital cited traumatic brain injury, a broken collarbone and scapula, COVID-19 pneumonia, respiratory failure and type 2 diabetes mellitus as the causes of death.