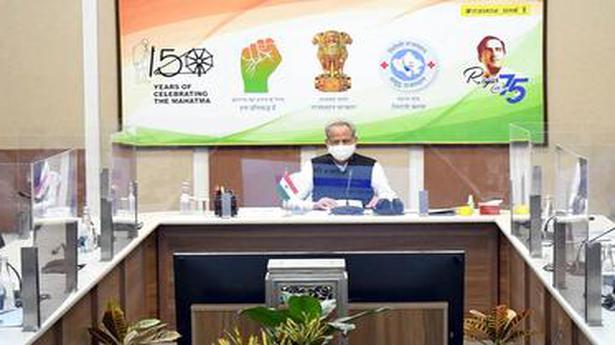 The district headquarters where the night curfew was tightened were Jaipur, Jodhpur, Kota, Bikaner, Udaipur, Ajmer, Alwar and Bhilwara.

The government of Rajasthan imposed a nighttime curfew between 8 p.m. and 6 a.m. on Saturday in eight cities with the highest COVID-19 infection and increased the penalty for not wearing a face mask in public places from ₹ 200 to ₹ 500, after a record 3,007 positives. cases were detected in a single day statewide.

The district headquarters where the night curfew was tightened were Jaipur, Jodhpur, Kota, Bikaner, Udaipur, Ajmer, Alwar and Bhilwara. Markets, restaurants, malls and other commercial establishments in urban areas of these neighborhoods will be allowed to remain open until 7 p.m.

The decisions were taken at an urgent Council of Ministers meeting here late at night due to the rapid spread of the virus infection during the holiday season and cold weather conditions. More than 550 positive cases were reported in Jaipur on Saturday, followed by 444 in Jodhpur, 215 in Bikaner and 210 in Ajmer.

Chief Minister Ashok Gehlot chaired the meeting, while ministers who were outside the state capital attended by video conference. Mr Gehlot said preventive measures were the need of the hour and several states were taking strict measures and withdrawing decisions to open schools and allow public gatherings.

Senior officials from the Medical and Health Department informed the meeting that rallies during Deepavali, recent municipal elections, and wedding ceremonies had contributed to the increase in positive cases. The number of patients had registered a sharp increase in the eight critical districts, while the winter season would worsen the situation in the coming months.

Mr Gehlot said that the presence of employees in all government and private offices, where the number of staff was greater than 100, would be limited to 75% in the eight districts, while a maximum of 100 would be allowed. to attend wedding ceremonies, social events, political rallies and religious gatherings.

A decision in principle was taken to acquire the hospitals attached to private medical schools for the creation of health establishments dedicated to COVID-19. In addition, day treatment facilities will be available in all private hospitals at government approved rates for patients with less severe symptoms.

COVID-19: All Of Delhi Can Be Vaccinated In A Month, Says State Immunization Officer

BJP A Party Of “Outsiders”, Has No Place In West Bengal: Mamata Banerjee