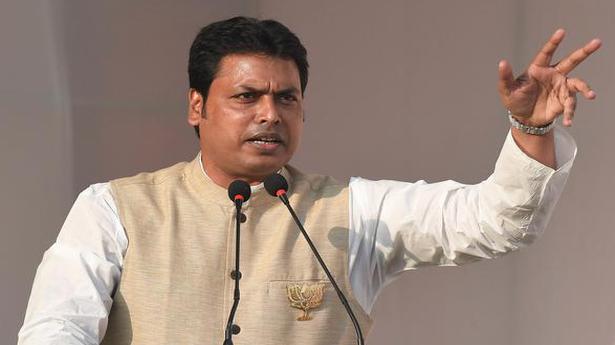 In a tweet, he called on people to refrain from sharing videos and images of violence on social media platforms in order to avoid misinterpretation in society.

Tripura police have also issued a warning against sharing videos on social media in their Twitter handle. “Strict legal action would be taken against those who share such videos and spread rumors,” they said.

According to the statement, the incidents north of Tripura were a public order issue, but on social media, videos were being broadcast to “ give the incident the color of community violence. ”

Police said the situation in Kanchanpur and neighboring Panisagar was now peaceful.

One person, Srikanta Das (45), was killed when security personnel opened fire on huge crowds from Kanchanpur who blocked the Assam-Agartala national road from Chamtilla to Panisagar in protest against the government’s plan to ” settling the refugees from Mizoram Bru in Kanchanpur. The angry mob lynched firefighter Biswajit Debbarma (40), who was trapped in the clashes.

Around 23 people, including 15 police and firefighters, were injured in the violence. Some of them were transferred to GBP Hospital in Agartala. Five security vehicles were damaged by protesters from the Joint Movement Committee (JMC), which led the unrest against the plan for the permanent rehabilitation of 5,000 Bru evacuated to Kanchanpur.

The JMC had imposed an indefinite strike in Kanchanpur, which entered Sunday on the seventh day.

The Tripura government announced compensation of 5 lakh each to bereaved families.

Meanwhile, Kanchanpur sub-division magistrate Chandni Chandran confirmed the deployment of Assam rifles and border security force personnel in the turbulent areas. The North Tripura District Administration imposed Section 144 of the Cr.PC in both Kanchanpur and Panisagar.

The Tripura government has selected 12 locations, including Kanchanpur, to rehabilitate some 35,000 Mizoram Brus currently housed in six makeshift camps.

In January, Union Home Minister Amit Shah presided over the signing of a quadripartite ministry agreement with the state governments of Mizoram, Tripura and the Bru refugee leaders to permanently settle the evacuees. in Tripura, ending the 23-year imbroglio. Refugee leaders recently met with Chief Secretary of State Manoj Kumar to demand the implementation of the agreement which offered a lucrative rehabilitation program to the evacuees.

The Civil Society Joint Action Committee, a platform of various tribal organizations, condemned the violent incidents on Sunday. He called on the people to maintain peace and harmony.

The company also urged the state government to implement the Bru Accord and end the refugee standoff for good.

Opposition parties have demanded a dialogue with protesters in Kanchanpur to resolve the issue. They also called for a judicial inquiry into the incidents.

The state government has ordered a masterful investigation into the violence in Panisagar.

CHIRAG SAHU - November 27, 2020 0
Union Home Minister Amit Shah spoke to the chief ministers of Tamil Nadu and Pondicherry and assured them of all possible support from...

Google and Facebook to be scrutinized by new U.K. antitrust unit...