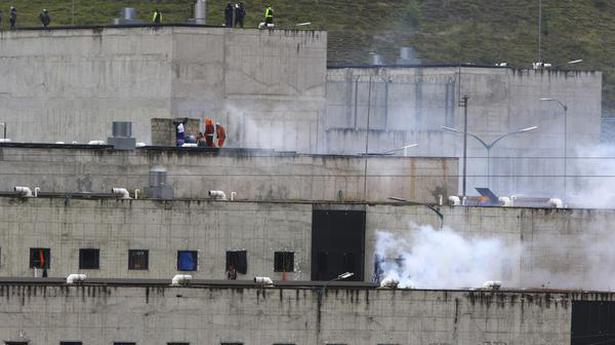 Prison authorities have described heavy fighting between organized gangs that bear names such as Los Pipos, Los Lobos and Tigrones.

At least 75 inmates died on February 23, and several were injured in riots over gang rivalry in three prisons in Ecuador’s overcrowded prison system, authorities said.

As security forces fought to regain control, distraught family members desperately awaited news outside the prison in the port city of Guayaquil in western Ecuador, where officials declared 21 dead.

33 others died in Cuenca prison in the south and eight in Latacunga in the center of the South American country, according to Edmundo Moncayo, director of the government prison management body SNAI.

“We want the list of the dead to be given to us,” said Daniela Soria, 29, one of 40 women outside Guayaquil prison, many of them in tears. “We know the problems are not over because everyone has a phone and my husband is not calling me,” she said. AFP.

A relative of an inmate grabs a fence outside the Centro de Privación de Libertad Zona 8 prison where riots broke out in Guayaquil, Ecuador on February 23, 2021. | Photo credit: AP

Previously, she had received a WhatsApp voicemail message from her husband, Ricardo, which she was listening to AFP. “They are going to kill me, get me out of here!” he could be heard exclaiming, the last she heard from him.

Ecuadorian President Lenin Moreno, on Twitter, attributed the riots to “criminal organizations” engaged in “simultaneous acts of violence in several prisons”. The authorities, he said, “are acting to regain control.”

The army was deployed to help police quell the uprising.

The Office of the Public Defender, an entity akin to an ombudsperson set up to defend human rights, called the violence an “unprecedented massacre” and expressed “concern at the lack of security in the country. , which translates into increased crime and violence. inside these penal establishments.

The prosecution said several detainees were injured during fighting between “criminal gangs”, including two in Guayaquil in serious condition.

Several police officers were also injured, Moncayo said, but no deaths were reported among security personnel.

Prison authorities have described heavy fighting between organized gangs that bear names such as Los Pipos, Los Lobos and Tigrones. They depend on drug trafficking and operate their criminal enterprises from prison.

Mr. Moncayo told reporters that on February 22, guards seized two guns that were to be used to kill the leader of a group imprisoned in Guayaquil.

“Inside, it’s like a market. There is everything: drugs, weapons, even puppies. Everything is sold, ”said Ms. Soria, the wife of prisoner Ricardo.

In order to reduce the number of prisoners amid the coronavirus outbreak, the government commuted the sentences of those convicted of minor offenses, reducing overcrowding from 42% to 30%.

This still leaves the Ecuadorian penitentiary system, with the capacity to accommodate 29,000 inmates in some 60 establishments, with a population of 38,000 inmates.

A 90-day state of emergency in the country’s prisons was ordered by Moreno last year in an attempt to bring gang activity under control and reduce violence.

But in December alone, prison unrest left 11 dead and 7 injured.

The riots on Tuesday coincided with a march by hundreds of natives in Quito to demand a recount of the votes after a first round of presidential elections this month that saw their candidate left out.

The current strong ties between India and the United States are the greatest testimony to the legacy of Mahatma Gandhi and Martin Luther...
Read more

When Eddie Murphy directed the original Coming to America, he was, almost indisputably, America's funniest man. Murphy was at the height of his fame,...
Read more

<!-- -->Bhiwandi's man was taken to hospital, where he was pronounced dead. (Representative)Bombay: A 45-year-old man in Maharashtra died yesterday, shortly after...
Read more

Indian vice-captain Ajinkya Rahane, who has been a regular in the Indian Premier League (IPL) now first with Rajasthan Royals and now with...
Read more