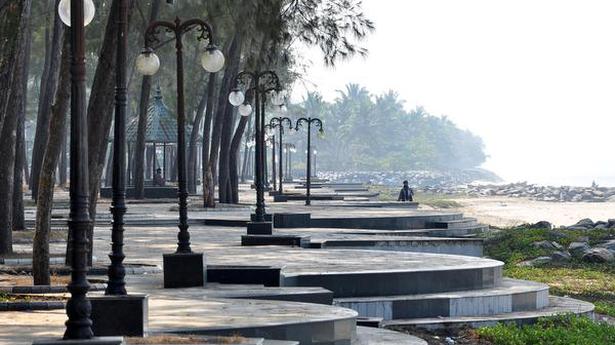 The reopening of Kozhikode’s main beaches continues to be a challenge for the District Tourism Promotion Council, as COVID-19 screening measures at tourist destinations need further improvement.

Kappad Beach, which was opened to visitors after winning the prestigious Blue Flag certification, was closed again after the quarantine of 18 cleaning workers in the area who were showing symptoms of COVID-19. Although the beach is likely to be reopened after a week, authorities in the health department are not backing the move.

Tourism department officials said Kappad Beach and Sarovaram Biopark were the two main destinations that generated good returns for the DTPC. The closure of Kappad Beach, which has attracted domestic and international tourists, has definitely been a setback in terms of revenue during the peak season, they added.

Although there have been calls to reopen Kozhikode South Beach and Bhatt Road Beach with better screening devices, authorities have not responded positively. The main challenge, according to the authorities, is the uncontrolled flow of visitors without respecting security measures. The police officers on duty struggled to cope with the breaches of protocol.

An official attached to the DTPC said the proximity of various containment areas to beaches was another major obstacle. “We are making decisions now based on the advice of the Ministry of Health. Although Kappad Beach can be reopened with improved safety arrangements, the same approach cannot be taken in the case of other beaches with a vast coastline and multiple entrances, ”the official said.

Ahead Of Election, Mamata Banerjee Extends Health Scheme For All In Bengal

Ahead Of Election, Mamata Banerjee Extends Health Scheme For All In...

Covid-19 hit UK immigration, but Indians among top to get visas